Happy Xmas (War is Over) vs Agadoo...

A revolving disco lightbulb is fun for about 30 seconds. Not two weeks. Definitely not forever. The kids refuse to take it down in their bedroom and its like going into the Ministry of Sound circa 1997 every time I walk in with a load of clean washing.

One child owning a Mi-mic, which not only amplifies their voice, but gives it a B movie horror film effect is annoying. Both kids having them is fucking ridiculous. Luckily they have to be charged up. And I’ve hidden the adapters.

A Christmas CD is just for Christmas. Maybe New Year at a push. But no-one needs to wake up to the sounds of Happy Xmas (War is Over) at 7am on 5th Jan. I thought the Black Lace CD was bad, but I’m now missing listening to Agadoo on repeat. I never thought I’d say that.

There are a finite number of episodes of Lego Friends on Netflix. I know. I’ve watched them all at least four times. Seeing a new one fills me with the same excitement as watching an unfamiliar episode of Friends.

The period after New Year should be one of winding down and routine. Of getting back to normal. Of finding places to store presents and discreetly taking old toys to the charity shop. Booking in to have a loft conversion done two weeks into January MAY seem like a good idea at the time, but having to then pack up a lifetimes worth of shit including GCSE books, boxes of letter from long-forgotten French exchange students, DVDs when you have no DVD player, videos when NO-ONE has a VHS player, is never going to be relaxing.

Indoor guinea pigs are noisy. And smelly. And when they have to be relocated into the front room to make way for all the other shit that has to come down from the loft, this will involve watching the telly with the constant disruption of squeaking and rustling. The floor is covered in sawdust and the sofa is littered with tiny hard pellet poos from where the children have been sitting watching Lego Friends with them on their laps, feeding them the green parts of their lunches.
Not to mention the smell. Did I mention the smell? I’M LIVING IN AN INDOOR FARM. 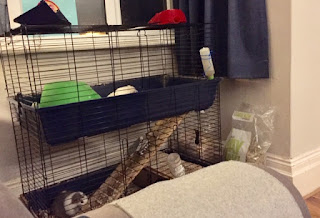 INSET days on the last Monday of the school holidays are just cruel.

Dry January is a myth.

So Happy New Year lovely people. May it be filled with lie ins. Hangover free wine. And children who repeatedly tell you how eternally grateful they are to have you as their parents.

PS I realise the last time I wrote the blog was when I was whinging about how long summer holidays were.

PPS I vow to write it more often.

PPPS and not just complaining about holidays. Although Easter can be a bit of a ball ache, now I come to think about it...