I’ve just been on a holiday for four nights for eighty quid for a family of four.

Let me recap. Four nights. Eighty quid. Four of us.

That’s a fiver each a night.

They say you get what you pay for.

I expected a fivers worth of holiday and I got at least that.

The offer was through the paper, and as an obsessive bargain hunter, I was all over it.

Our best mates, who also like a good bargain, did the same.

You chose your resort online, put in the codes and Bob’s your Uncle, blah blah blah.

Thing is, I hadn’t really looked at what the resort was like other than it was less than a couple of hours drive and we had visited the nearby beach before, which was beautiful.

So it was a bit of a surprise when my mate e-mailed me one of what turned out to be thousands of awful reviews.

By awful I mean fucking horrendous.

The most recent of which, which must have been submitted whilst we were staying there, include:

The only good thing is the arcade if I'm honest but just bear in mind to bring plenty of money cause that's really all there is to do.

Food vile, staff were so rude, no activities were open.

Please don't go here, I can't think of anything positive to say about the place.

I don't advise anyone to go there and certainly not if you have a medical condition.

Or my personal favourite:

I THINK THIS PLACE NEEDS SMASHING TO THE GROUND. 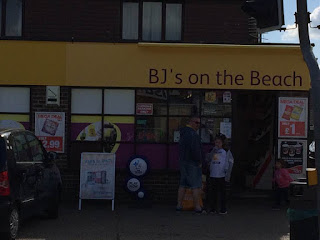 But, bearing in mind we spend most holidays crammed in a hot tent using a rolled up coat for a pillow and squatting around a one ring gas stove to cook, this sounded like luxury.

And forewarned is forearmed as someone once said.

So equipped with our own bedding, pans, litres of Detol and enough booze to forget the whole holiday if necessary, we set off.

Now, the only thing I like better than a bargain is a bit of retro/ nostalgia.

And shit me, this place was bursting with it.

From the sticky-floored nightclub that stunk of fags where we were greeted by the Blue Coats who enthusiastically gave us our room keys, to the council estate/ prison-style layout of apartments.

It was like living out an episode of Phoenix Nights/ Prisoner Cell Block H. Both of which, I should emphasise, I LOVE.

OK, so the lawn in front of our flats was more fag butts than grass, but, as long as you weren’t planning to sunbathe there, then it was fine.

And a swing park on every corner meant the kids went absolutely mental for this place.

An all-time high for me was going to a disco at 11am with the children on the first full day, where the Blue Coats took them through the dance moves to Agadoo, Superman, and the Fast Food Song, all of which I knew so well I was half hoping that I might win the Easter egg prize for best dancer.

These songs would become the soundtrack to our holiday.

That and one about a Big Fish swimming in the sea that is set to a kind of gabba sound track. 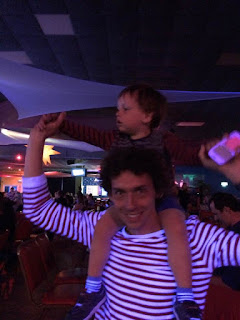 Larging it in Lunars.

Every time I walked past the reception the queue of people waiting to complain was getting bigger, whilst we were having a total ball.

And I realised, however obvious this is, as long as the kids are going nuts for it, you’ve got good friends to hang out with yourself, and enough wine to sink a ship, it really doesn’t matter where you are.

Even if you’re sleeping on a torn pleather sofa that doubles up as queen size bed.

So here’s to shit holidays.

And making sure that you never stay for longer than four nights.

As Donna from East London put it better in her review: Yes, the apartment is tired, and it is very basic, but if you want better.......don't be so bloody stingy and stay in a hotel! Let's face it, if you stay in budget accommodation here it's cheaper than the YMCA or a youth hostel at £69 for 3 nights. YOU GET WHAT YOU PAY FOR!!!!!!