Mind-numbing film that doesn’t involve too much thinking.

In fact the movie was so successfully dull that I nodded off halfway through, which is a bit of a signature move.

Only to wake at 3am sat upright on the sofa with a blanket over me like an old lady.

This is the level of sexy I operate to these days.

It was then I realised that I still had my contact lenses in and that one had totally disappeared down the back of my eye.

Now, I like to think I’m calm in a crisis.

That I don’t get worked up about the small stuff.

So I did what any level headed 30 something, mother-of-two would do.

I panicked my face off, poked around so much with my eyeball that it was so sore I couldn’t open it.

Then woke Ben up by ugly-crying and blubbing that I thought I was going to go blind.

One phone call to NHS Direct later and I’m in a taxi to A and E with a taxi driver who kept reassuringly telling me they'll just 'pop your eye out.'

He said it about a hundred times.

'It's fine, they just pop your eye out.'

'Just pop it out, then pop it back in again.'

There’s nothing like queuing up with people who have dislocated their shoulders, broken a foot or have an open head wound to make you feel like a bit of a weaner with your lost contact lens.

But, as is the nature of our excellent NHS, no-one made me feel like a dick.

They sorted my eye out, gave me some antibiotic cream and sent me on my way.

And by 5am I was back in bed, with a pointless one hour of sleep before the children woke up.

Not the best date night to so far.

But on the bright side, it can only get better.
Posted by Anna Jefferson at 20:24 7 comments:

You know how you have those moments when everything comes together and you feel all content and calm, and look at your family and home and think, yep, I’ve got this shit nailed?

So I had this brilliant idea that now would be the time to do up our old lady bathroom.

That I couldn’t have another bath looking up at the apricot polystyrene tiles on the ceiling.

That the sink that has been fitted inside a kitchen unit, (that’s right, someone had the fantastic idea to build a kitchen unit in a bathroom,) was losing its quirky charm.

I could have done a bit or research.

Worked out what we wanted.

Got some drawings or whatever it is you do done.

That would have been the sensible thing to do.

Alternatively, I could have just thought fuck it, I’ll get the wall knocked down and then work out what the fuck we’re doing afterwards.

So. There is one minor problem here.

Actually there’s loads if you think we now have to go to a neighbours to bath the kids until we get our shit together, but on the plus side my gym membership is finally paying off with using their shower every other day.

But the main problemo is our totally change averse two-year-old.

I had tried to warn him that the bathroom might look a tad different when we were driving home from the childminders.

I could see him clenching his little firsts and sucking his lip in, gearing up for the mother of all mardies.

I kind of get what he means. 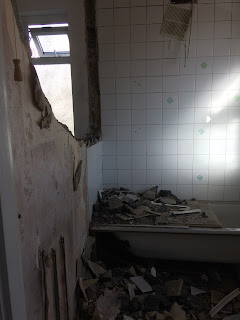 This doesn’t scream 'long soak listening to radio four with the candles lit.'

I will have an aspirational bathroom that cries out how together my life is.

Then I’m going to build my life around it.

I’m just one B and Q bathroom planning session away from being a grown up.

I had forgotten how 100% disgusting potty training it.

Your brain cancels out the pain; otherwise you’d insist that your child wears a nappy until they turn eighteen.

It’s not just the that wee and shit gets EVERYWHERE.

But that’s all part of the job, right?

That’s part of the pay off of having these little creatures who love you unconditionally and think you’re the best thing ever.

What is not part of the deal is your little boy climbing onto the kitchen table when you’ve left the room for less than two seconds and weeing all over the table whilst your five year old is eating her breakfast.

Pissing on the table.

‘What are you doing??’ I ask in total despair.

It’s like living with the drunk friend who is a fucking nightmare to go out with, but always manages to charm you round the next day even though they’ve ripped your favourite top they’d borrowed without asking and puked and missed the loo in the shared bathroom.

If this is him at age two, what do the teenage years hold?