This has been the most fearful and yet empowering few days to be a woman.

We now have a hateful, dangerous misogynist in the most powerful position in the world. He has no respect for women, he has made that clear through the flippant way he talks about his own daughter, how he views women as pieces of meat; commodities for his own pleasure.

And that makes him the most dangerous man in the world.

He has the capacity to change the world for the absolute worst, and has already started to do so.

What will this mean for women in the US? What does it mean for women all over the world? For our daughters; our daughter’s daughters? Have his sexist views and judgements given other people a licence to take advantage, to be hurtful, to change the course of development and take us back to the 50s?

Has he legitimised hate and misogyny?

Overwhelmingly angry in a way I have never done in all my adult life.

But that anger can also be used as a force to be reckoned with.

And that is what happened this weekend.

All over the world.

Women came together to say they are not going to take this shit.

That only they will make decisions about their own bodies.

That they are angry, furious, and are united in that anger.

This isn’t to the exclusion of men, far from it. 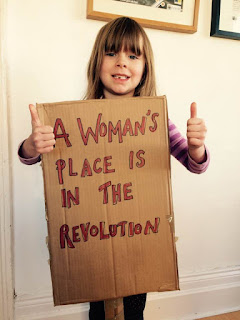 That something isn’t right just because you are told it is by an orange man in a toupee who has no experience in politics, but will be making life-changing decisions on our behalf.

No fucking thank you.

On behalf of our grandmothers and great-grandmothers we say no.
Posted by Anna Jefferson at 21:52 13 comments:

Week 243- getting trashed, getting bitten and getting on the resolution train in week two...

You know when you have one of those calm Christmases where everything goes like clockwork, you feel relaxed and ready for the New Year, you make achievable, ambitious resolutions and start to do them on January 1st cos you are SO READY?

So I was all geared up to start going to the gym in the New Year.

I’d asked for gym gear for Christmas and disappointingly got it.

But on the plus side I am going to be a VISION in lyra now instead of an embarrassment in my pyjamas on the treadmill.

The budget gym was working out to be not so budget as I’ve been once to a 20 minute class in four months so that cost me eight quid.

Or four quid a minute.

I think Beyonce gets out of bed for less.

I’m going to finish my book.*

But firstly I’m going to get so fit that I’ll jog everywhere.

To pick the kids up.

I’m going to live in lycra.

So January day one. (Which is obviously 2nd Jan as everyone knows resolutions don’t actually start until the day after New Year’s Day.)

And I’ve got the mother of all sore throats. Like can’t-swallow-water sore.

Day two and I wake up with a spider bite on my wrist.

Are you shitting me?

Who get’s bitten by a spider in January, whilst in bed?

I give it a scratch and it pops.

Fast forward three days and I’ve still got a throat like a bag of old razors and I’m sat in A and E with my infected bite.

The GP even looks a bit gipped out by it.

So. I haven’t exactly cracked the resolution thing yet, but when I say they start on day two, what it actually means is week two, right?

Looking forward to sharing the next year with you.

*If I don’t finish my book, you have permission to trash my laptop and permanently lock me out of Facebook.