Week 251- angry drivers, a raging world and the strength of kindness...

The world feels like a very angry place to live in at the moment.

There is so much rage.

Every time you turn on the news or open a paper there in another example of hatred and fury.

And it feels like it’s spilling into every day life.

Since Brexit there has been a significant increase in the number of hate crimes being reported.

People who have lived in Britain their whole live being told to ‘go home’ because of the colour of their skin, their accent or the clothes that they are wearing.

What has happened to us? When did it become acceptable for people to be so fucking cruel?

Only yesterday I was driving to a meeting on a busy dual carriage way, and, having moved lanes to let a lorry in had obviously riled the driver behind who had to slow down to let me in.

Having flashed his lights at me, he then proceeded to undertake me and then slam his breaks on, leaving me no other option that to do an emergency stop or crash into the back of his car at 70 miles an hour.

As he drove past me, he and his wife, both in their mid 50s, scowled at me.

There’s no way they could have not seen the child seats in the back.

Or the fact that I was clearly shaken.

What kind of red mist descents on a person where they feel their only way to express themselves is to risk at least three people’s lives?

As I continued with my journey, jumpy and shitting myself every time I heard a beep or a loud noise, I started to get angry myself.

How fucking dare he behave so irresponsibly?

What if I had crashed into him, what then?

Had he thought past that?

What about my children? How would Ben explain to Nancy and Thomas where I was? That I wasn’t coming home, that some fucking prick had acted on his some misguided instinct and changed the course of so many lives in that split second.

I could feel the anger starting to bubble away.

I was gripping the wheel, my teeth clenched.

And then it struck me.

But I didn’t have to be.

I was shaken but I was OK.

He, on the other hand, has to live with that fury day in, day out.

His wife has to listen to him raging, and shouting and taking risks everyday.

But we do have a choice.

We can decide how we react to things.

How we treat people.

How we live our lives.

To think before we react.

We have a choice.

So let’s choose kindness and compassion.

Because we can’t change some of the shit that is going on in the world at the moment.

But we can change how we make people feel in our own lives.

We can hug our children tightly.

We can show kindness.

Because the world is a fucking nasty place at the moment.

But if we feel angry, let's channel it.

Let’s not let it get the better of us.

I’ve taken to doing the times table to bore my son to sleep.

Which in itself is proving a bit of a challenge.

I can’t remember anything past the sixes.

And this guy is literally impervious to sleep.

I’m knackered thinking about it and I was just watching.

But still he’s wide-awake, singing his rendition of ‘Danny Boy,’ which sounds uncannily like  he’s drunk as he only knows every third word so just makes undecipherable noise for the rest of the time.

So the new plan is to just be so unbelievably boring that sleep seems like the more exciting option.

Which as someone who prides herself on being ABSOLUTELY HILARIOUS is not coming easily.

I’d play him the talking clock if it wasn’t so fricking expensive to ring up off a mobile.

This is now my life.

Fun times during the day.

I could be a freaking super hero.

Week 249- leftovers, The Bachelorette and squeezing into a bikini...

OK, so I’m thinking, and it is ONLY a thought, but maybe, just maybe, I can’t continue to blame baby weight on the fact that my skinny jeans are so tight they basically cut off the circulation to my legs.

My children, at 2 and nearly 5, aren’t really babies anymore.

And you don’t hear mothers talking so much about losing their toddler or nearly-started-school weight.

I have, to, possibly, face up to the reason that I’m currently sat watching The Bachelorette with my top button undone is not because I have had two children.

It may have more to do with the third helping of roast dinner I ate.

Now, in my defense, it was the children’s leftovers, so, in my head, they doesn’t even count.

I don’t know when I started eating what the kids leave on top of my own dinner, but I don’t even bother with a fork now, just stuff it all in my face on the walk to the dishwasher.

I have been on a ‘diet’ since I was about 13. That doesn’t always mean not eating, but always thinking about not eating even when I’m eating.

But now my ‘diet’ involves eating an average of six meals a day, at least three of them by mistake.

The thing is, it wouldn’t really bother me except we are going to France on holiday in 18 days and I have, for a reason only know to my logical still-awake-at-3am tiny brain, bought the most gorgeous Boden bikini.

Unfortunately the model on the website and the reality in the mirror couldn’t be more different.

Now I don’t think I’ve EVER looked like the Boden woman.

BUT, I can’t even get the bottoms on at the moment, and the picture of her didn’t involve her wearing a pair of pants painfully stuck somewhere round her mid-thighs because they wouldn’t budge any further up.

The problem is, and this must be the Northerner in me, but I have now had them too long to return them, so, at an eye-watering forty quid for the set (SERIOUSLY, what happens to your brain in the middle of the night when a two-year-old has woken you up by kicking you in the kidneys?) I have decided that I will squeeze into the bikini if it’s the last thing I do rather than have spent forty smackers in vain.

It’s not going to look pretty.

But I will get them on.

And at the same time make sure that there is no photographic evidence.

So I have 18 days to lose about a stone.

The internet told me so.

And my first step is to stop eating the kids’ tea.

See, it might not be the weight I carried from pregnancy, but it is child-related weight.

If they ate their tea I wouldn’t have to.
Posted by Anna Jefferson at 21:34 No comments:

Week 248- showing off, wearing sunglasses in bed and everything going to shit...

My two-year-old son now openly mocks us at bedtime.

I made the cardinal mistake a few weeks ago. I said out loud that I thought bedtimes were going well.

Almost as it slipped out my mouth, the look of horror crept over Ben’s face.

‘What did you say that for?’

And as I downed my glass of wine, I could feel everything slowing going to shit.

He now absolutely refuses to go to bed.

I don’t mean that he has a tantrum and then eventually nods off.

He will close a book mid-story.

Politely respond, ‘no thank you,’ when asked to stop kicking his covers off.

And then just hops out of bed and leaves the room like he’s getting up to have a shower before work.

Yesterday, he sat downing a bottle of milk, legs casually crossed, wearing my sunglasses IN THE DARK. When I asked him if he needed to wear shades in bed, he just pushed them up to rest on the top of his head, before finishing off his drink and leaving the room. 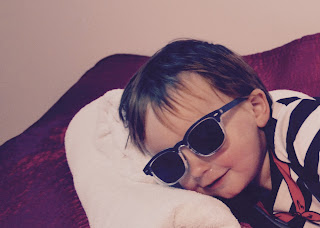 When I do find him, he’s sitting on the sofa, arms folded, requesting Peppa Pig.

ARE YOU SHITTING ME?

He is impervious to being told off.

Non-plussed at threats of having fun things withdrawn.

And generally above any kind of parenting tricks.

Short of lying on him till he gives up the game, I have absolutely no idea what to do.

So, it looks like for the foreseeable future, we have another buddy to sit off with until 10pm.

That will teach me for showing off.
Posted by Anna Jefferson at 21:07 4 comments: