Thank you to everyone who voted for me in the MAD Blog awards.

I was a finalist in two categories- Best Blog Writer and Blog of The Year. Although I didn’t win, it was pretty ace to get that far, and more than that, a brilliant chance to meet a lot of women who are, similarly, documenting their experiences of motherhood, but in lots of different ways.


The do was what I can only describe as the parent version of the Oscars.
Held in a swanky hotel in Kensington, the finalist, of whom there were over 70, were all dressed-up to the absolute nines. I mean, these women looked seriously good.

Ulrika had, thank God, lent me her fab red dress, as I HATE all my clothes at the moment and either feel like a wrinkly wanna-be sixth former, or a middle-aged country-living housewife in most of my stuff.

The former as I just can’t part with a load of inappropriate leopard print outfits from about 20 years ago, the latter due to some ill-thought out Boden purchases late at night on Ebay. As soon as Nancy is old enough for fancy-dress she’s going to have a mountain of stuff to choose from.


The thing that struck me most about the awards, was how supportive all the finalist were of each other.


You’ve got a group of people competing for some quite weighty prizes, sitting in a room together, downing free booze.

But, and I don’t say this exclusively, as there were some dad bloggers at the awards too, I think that the supportive nature of the event was down to the fact that it’s attended almost entirely by women.

Having felt a bit self-conscious, (Ulrika’s dress looks immense on her, but she is several inches taller than me and quite a striking-looking Scandinavian - where as I am more of the shorter/Welsher-looking variety,) a fellow finalist came up to me almost the moment I walked through the foyer and told me how lovely I looked in the dress. Thank you to whoever you were. You made my night before it had even begun.
On my table at dinner I was sat with some really interesting women who write about their experiences of parenting. My Two Mums talked of how they’d met over their huge dislike of mushrooms, (great story- bit of a shame the main course was mushroom risotto).

On my other side I met Filipa who writes Gourmet Mum, a toxicologist turned food blogger. Since meeting her I’ve read her blog and am inspired enough to give some of the recipes a bash.


And also Maddie, who writes Gammon and Chips and Sarah from A Field Somewhere, both of whom are Brighton-based and I hope to see again.

I also got to hug Dr Ranj too tightly- which I imagine he was preeetty pleased about. 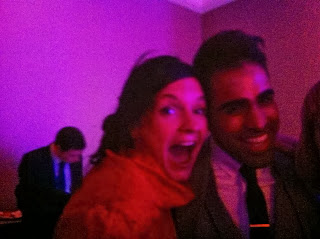 So. Thanks again for reading my blog.


I only hope Nancy doesn’t kick my ass when she’s old enough to read it herself...
Posted by Anna Jefferson at 20:31