We’ve got a bike.

Nancy and I are mobile.


I used to bike everywhere.
Well, free wheel down hills and push it back up, usually with the handle bars laden with plastic bags, like a shopping trolley extension.
But the intention was there.
I was biking into work until I was about six months pregnant, when one day, I got off, realised how a) knackered I was and b) it gave me massive crotch ache, and though nooooooooooooo thanks.


So I chained it to the lamppost near my office, and there it stayed for three months, where I occasionally picked it up when pissed revellers had kicked it over.
Ben retrieved it the week before Nancy was born. By which point it wasn’t even good enough for the bike man down the road to pick up for a tenner. And he'll buy anything.


So my dad has got us one for our combined birthday and Christmas presents from now to eternity.
When we were in the bike shop, the fella was asking about helmets for Nancy, and showed me a selection of bright pink, flowery hats for little girls, and was surprised when I opted for the Spider-Man one for her. 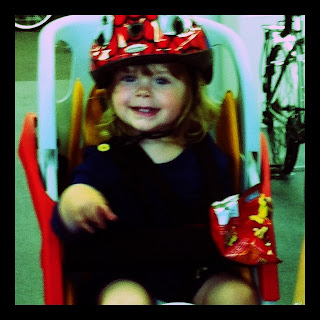 Now, this wasn’t meant to be a one women protest about gender stereotype, although he did guide me towards blue helmets for me afterwards.
The Spider-Man one was loads cooler.


But why is it that the choice has to be limited to varying shades of pink for girls?
Why can’t it be lots of different colours, and if you choose pink, then fabbo?


And the older Nancy gets, the more aware I am of the lack of choice.
How you have to opt for either girls or boys swimsuits in Boots. Bright pink flowers or bright blue with a truck on the front.
Where’s the choice? Where’s the greens, the yellows, the beiges?
Or pink Lego. PINK LEGO? Now, this wouldn’t be so bad if it was targeted at all children.

But it’s described as ‘The perfect LEGO starter set for any girl!’


If Nancy grows up wanting to wear head-to-toe fuchsia, that’s absolutely fine with me.
Just as long as she know that's not her only option.


I follow Pinkstinks with interest, as they highlight toy, after product, after item of clothing, which further drives a wedge between little girls and boys.
Nancy currently has absolutely no idea that there is any difference between genders.

Apart from the observation that some people have ‘tails’ and others don’t.


Which is a fantastic way to look at the world.
And long may it continue.


But for the meantime, she and I will whizz round town, her donning the helmet of debatably one of the greatest superheroes of all time.
And until she tells me otherwise, that's how it will remain.
Posted by Anna Jefferson at 20:59