There comes a point in your post-baby life when you have to either accept the fact that this summer might not necessarily be the one where you’re going to have the beach ready body.

And as a consequence, spend days in 28 + degrees covering up, sweating your face off.


Or alternatively, think, fuck it. I’ve spent thirty quid on a Boden bikini. I’m going to bloody well wear it.


I have a picture of myself from a holiday in Benidorm taken about 12 years ago. (Disclaimer- it was allocation on arrival, I thought I’d booked us a holiday in Alicante.) 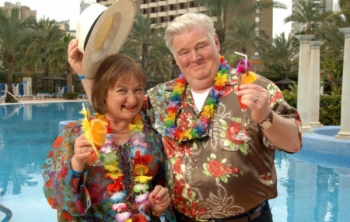 In the picture, I look how I think I’ve looked my whole pre-baby life.


I had a sun tan, I was wearing a flattering bikini, the picture was taken at the right angle, and all these things working in conjunction, meant that I didn’t look too bad IN THAT ONE PICTURE.


Unfortunately, the pose/ tan/ swimwear combo hasn’t been replicated since.

But I live in hope that it will one day.

And THAT’S the moment that I start to dress how I want to, feel more body confident, and generally become a better career person, girlfriend and mother.


The truth is, it’s all rubbish, of course.


As I took Nancy to play in the paddling pool on the beach this weekend, I looked around at the dads with their paunches, happily walking round topless, some wearing the tiniest of shorts, and no-one batting an eyelid.


Whereas the thought of whipping off my summer dress to catch some rays in what is, in reality, quite a modest bikini, made me freeze with fear.


The fact is, my body has changed since having a baby.

Of course it has.

You can’t grow a whole human being inside you for nine months, and it not look a tad different afterwards.


I’m not saying I wear my stretch marks with warrior pride, but there are worse things than a few tiger stripes on your tummy, at the end of the day.


Misspelt tattoos, for example. That can’t be great.

But, as I’m trying to muster the courage to step forth in a two piece, companies like ‘By Post’ tweet things so thoughtless that you wonder how they manage to communicate with ANYONE. Let alone, build a business based on promotion via social media.


So, one of their employees tweeted; “During this heatwave, please kindly dress according to the body you have rather than the one you aspire to. And send lots of postcards”


Now, I’m sure someone must have thought that was hilarious, witty and insightful. And I’m not suggesting we should all be wearing thongs on the beach mid-menstrual cycle.


But I do think that women should feel comfortable to wear whatever the hell they like.

And I think that right is absolutely cemented after an average of 10 hours in labour.


Luckily, the twittersphere (never thought I’d find myself writing that) thought the same, and they received a backlash of tweets from angry men and women, at which point someone had to spend the rest of their working day tweeting apologies.


But, genuinely, at what point is it OK to feel fine in your own skin?

To accept that your body might not ever look like Kate Moss’, regardless of doing the 5:2 diet or donning that Slendertone every other day.


At what point is it OK to know all that, and put the bikini on with pride anyway?

And I spend the rest of the weekend swimming, playing and sunbathing that way.


But I’ve spend thirty quid on my bikini.


And I’ll be damned if I’m covering up and sweating to death through another summer of body shame.
Posted by Anna Jefferson at 18:53