Week 83- family holidays, sucking crisps and Chunk from The Goonies

Nancy’s awful passport photo got an airing this week, as we went on our first family holiday abroad.


There are certain things that I have learnt, and which I need to remember so that I don’t make the same mistakes again.
1.    A hotel room is romantic for a couple, but is more like a padded cell for two adults and a baby.


2.    The north of France is very close to the south of England, so similar clothing is necessary.


3.    Don’t be tight when it comes to sea sickness prevention methods. One parent being sick is a bit frustrating. Two parents tag teaming it to go for a vom in the loos is pretty grim. A family of three puking up for the entirety of a four-hour ferry ride is as near to a nightmarish journey as I can picture.
We fancied finding somewhere you could go on holiday which wasn’t going to cost the earth, and we could go more frequently than never, which was our previous tally of holidays abroad.
So, with a ferry terminal just 15 miles down the road, Dieppe was the thinking man’s choice.

We had a surprise early start.

Ben and I both had childhood memories of just rocking up to the ferry and driving straight onto the boat, so hadn’t budgeted that you had to get there 90 minutes prior to departure. We realised our error 10 minutes before nodding off, and as a consequence clocked up a night’s sleep of four hours.

So we were pretty knackered on arrival, and decided to spend our first night in the hotel.


We bought a metric shit load of stinky cheese and cheap red wine, with the idea of a picnic and a film on the laptop, once Nancy had got to sleep.

She obviously had different plans.

And after shouting, ‘get out, get out,’ from her travel cot, which was just centimetres away from our bed, we resorted to the only tactic we could think of.

Turn all the lights off and pretended we were asleep too.

And we were sat in total darkness sucking crisps for dinner.
Turns out one room is not enough for three people with varying bedtimes. This also applies to getting up. If one person is awake at 5.30am. Everyone is up.


As Facebook was a flurry of people talking of snow in London, snow in Leeds, snow in Birmingham, I threw back the curtains to bright blue French skies and thought, ‘Merveilleux! This is why we came abroad.’

Until we stepped outside the hotel and were hit with near horizontal icy winds.

I don’t know what made me think to only pack summer clothes for myself. It’s like I’d finished packing Nancy’s warm stuff and then had momentary holiday amnesia and thought I was going to the Bahamas.

Standing on the beach in Dieppe with tears streaming down my cheeks, and bitter gales blowing up the bell sleeves of my summer jacket, I starting wondering how far you’d have to go to get a thermal vest and pair of pants in a town that mainly sold scallops and mussels.
Nancy ran round in circles announcing, ‘not hot, not hot,’ and then we spotted it.

A beacon in the darkness.

A light at the end of the tunnel.


It’s amazing how quickly the transformation happens.
I know the days of girls holidays in Rhodes, drinking fishbowls of booze the size of a small country and taking your chances with the sea at 2am are probably over.

But now I wet my pants over a ball pool on the ferry, or a slide in the middle of a built up area. Anything which means Nancy might have a nice time.

We spent quite a lot of time at the kids park. And the aquarium which also doubled up as a slightly boring fishing museum. And the swimming pool.


We also realised that the only way to eat past 7pm was to get Nancy ready for bed, put her in her pram, wheel her round till she was asleep, then wedge her next to our table in a restaurant.

I can’t see this working in a Wetherspoons, but it felt tres continental to take Nancy out for the evening.
So, having taught Nancy to say bonjour, and eaten an average of four croissants a day, we were warming to the idea of becoming frequent visitors to Dieppe. Of becoming regulars at La Coupole. Of getting a taste for shellfish.


Until we all got on the ferry home.
With the winds picking up, the ferry was choppy to say the least before we’d even left the harbour.
And less than 10 minutes in, both Ben and I had gone green.
30 minutes and we’d both been ill for the first time.
An hour at sea, and Nancy had also been sick down her clothes, her change of clothes, and my clothes.
It was like the description Chunk gave in The Goonies, when he started barfing in the theatre and then everyone around him started throwing up.

Those who weren't already feeling queasy, started to look decidedly off colour, and the waitress on the ferry doubled up as a reluctant puke clearer uper, patrolling the aisles with a massive roll of industrial blue kitchen roll and rubber gloves. 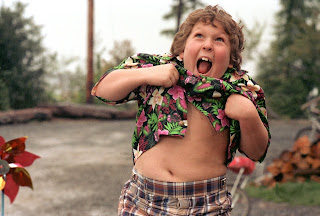 The plus side was that we managed to clear about four rows of seats around us in a previously crowded part of the ferry so there was room to stretch out.


So, we’ve not booking the next trip. Yet.

Before we set sail again we are going to:
1. book self catering accommodation.
2. pack climate appropriate clothes.
3. invest in a family pack of anti nausea wrist bands.