I’m sat off with Ben, stuffing my face with a similar sized portion to him of chips, beans and fish fingers, and wondering why I’m still nowhere near fitting into my pre-Nancy swim suit.

The leg holes cut off my circulation, and the halterneck is more like a noose.


And then Ben goes out for a 10-mile run to train for his third marathon.
And I open a bottle of wine, pour a third of the bottle into a glass and watch a double bill of Corrie, with the top button of my jeans undone.


And it dawns on me.
I haven’t actually done any proper exercise since labour.


I think about it. A lot. In fact if contemplating getting thin was a sport, I’d be a triple gold medallist.
I walk to work. Which isn’t very far. And pick up Nancy for a cuddle, which I’d convinced myself was a bit like weight-lifting.

But actually, I don’t do anything. Nothing at all.


A recent picture of me in a sleeveless top revealed that the top of my arms look like mottled, uncooked hocks of ham.
Which I wish I’d noticed before leaving the house.
But I reckon I must have reverse body dysmorphia. And if that isn't a condition, it should be.
What I see in the mirror won't squeeze into my clothes.
A bit like Shallow Hal. 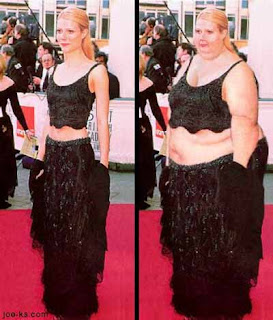 And then I had a moment of inspiration. Partly fuelled by the second glass of wine, and definitely spurred on by the fact that Michelle Collins was meant to be playing 50-year-old Stella, and she looked better than I’ve ever looked in a vest top, even though she’s meant to be 16 years my senior.


So I started Googling free gym passes. And before the credits had started rolling, I was signed up for a three-day trial at the gym round the corner from my work.
Now. I wasn’t about to fork out on a snazzy gym outfit. But looking back, the Primark leggings which had seen better days, were probably not appropriate sportswear.


Especially with white pants on underneath.
There were mirrors everywhere to highlight the fact that my virtually transparent black leggings were more like 10 denier tights. Those combined with the sports bra which was too small before I had Nancy, meant I really was a sight to behold.


Walking into a gym for the first time is a bit like turning up to a party you’ve been invited to by someone you don’t know all that well, and then getting there and realising that you were only actually invited out of politeness. And that it’s more of an intimate get together than a party. And everyone knows each other really well and aren’t too sure why you’re there. For example.
I lurked around in my see-through leggings, waiting and watching a load of uber fit people stretching, pulling, lunging, and generally looking like they knew what they were doing.

And then took a deep breath, had a word with myself, and stepped onto the treadmill.


The biggest surprise for me was how much I enjoyed it.
Not so much the running, because, let’s be honest, being sandwiched between two sweating, panting, body-builders on treadmills isn’t anyone’s idea of a laugh.


Or the weights, because, turns out lifting Nancy hasn’t done anything for my core strength, and my arms were shaking like a shitting dog after two lifts on the triceps strengthening machine.
But I enjoyed the feeling of doing something for myself. Having half an hour when I didn’t have to think about anyone else. Or make dinner. Or put a wash one. Or go to a meeting.


The women there looked spectacular; I suspect it’s a bit of a show offy gym. Not like the council one I used to go to where you had to breathe through your mouth in the changing rooms as not to sniff the drainy smell.
But there was one ally there. A Chinese man in his 20’s sat on the rowing machine in his jeans; office shoes and anorak, gently peddling away whilst texting on his phone.


I sat off next to him, we exchanged nods, and I thought, I might have see through leggings on, but at least I’ve bothered to get changed.
So, three days later, and 2 pounds heavier (how can that be? It CAN’T be muscle already...) I have signed up for another free pass at a different gym.


I’m not expecting to fit into the swimsuit overnight, but at least it justifies the extra fish finger or three.
And digits crossed there will be some woman there wearing a body con dress and heels, jogging on the treadmill, and I can use the machine next to her.
That would be the dream.
Posted by Anna Jefferson at 14:42